Skip to content
Home
Cross Trainers
Where is NordicTrack located? – A Complete Guide to the International Sports Brand

NordicTrack is a frontrunner in today’s home fitness market, producing premium, high-tech home gym equipment designed for people who are willing to pay for quality and reliability. Although originating in the production of cross country ski simulators, the brand is now more familiarly known for their high-end range of treadmills, elliptical cross-trainers, and rowing machines.

Where is Nordictrack located? NordicTrack is owned by ICON Health & Fitness, a global fitness company whose headquarters are stationed in Logan, Utah. Manufacturing and assembly operations are spread throughout the world, with many parts and production lines being located in China.

Today, we’re going to take a closer look at this titan of the home fitness industry, including their base of operations, their international markets, and their history.

In 1998, the NordicTrack brand was acquired by ICON Health & Fitness. This was following the collapse of NordicTrack’s previous parent company, CML, who were forced to file for bankruptcy.

ICON Health & Fitness are a leading international producer of home gym equipment. Their portfolio includes, as well as NordicTrack, the other popular market competitor ProForm.

The ProForm range also consists of cross trainers, treadmills, rowing machines, and exercise bikes, but with models that are slightly more budget-friendly than their higher-end NordicTrack counterparts.

ICON also owns Freemotion and the interactive, remote workout platform iFIT. The latter is a stiff competitor to Peloton and other subscription-based, remote exercise media brands.

However, the origins of NordicTrack manufacturing can be traced back to the winter of 1975, in a small town in the midwest United States.

Ed Pauls, a cross country skier and mechanical engineer from Chaska, Minnesota, decided to try to produce an exercise machine that could mimic the motion and physical strain of cross country skiing.

His aim was to manufacture a piece of equipment that would allow him and other athletes to train effectively indoors during the cold, dark midwestern winter months.

Manufacturing started out on a small scale in Chaska, Minnesota. However, by the 1980s, Pauls’ cross country ski machine had come to dominate a newly emergent and highly lucrative home fitness market.

CML, a large corporation that branched out into numerous other fitness markets, took over the brand in 1988 and began to expand their manufacturing base. The 1990s also saw NordicTrack producing motorised and non-motorised treadmills, weight training machines, and other gym equipment.

However, CML struggled to stay competitive in an increasingly broad and globalised international market. The company eventually filed for bankruptcy in 1998, with the NordicTrack brand being acquired and continued by ICON Health & Fitness.

Since then, NordicTrack has managed to maintain its position as a trusted and popular home fitness brand, being seen as a strong symbol of high-end, reliable equipment for home gym enthusiasts.

Where is the NordicTrack factory?

As with many companies manufacturing equipment for an international customer base, NordicTrack products are unlikely to be produced in a single factory or location.

Back in the 1970s and 1980s, NordicTrack’s manufacturing base of operations was in Minnesota, starting in Chaska but then expanding to Glencoe and Belle Plaine.

In an attempt to reduce operating costs, CML, actually shut down a number of dedicated manufacturing spaces in the early 1990’s, switching instead to manufacturing contracts in order to fulfil their production needs.

This meant that NordicTrack was no longer solely manufactured within Minnesota, although the exact location of these new manufacturing contracts is unclear.

Today, the majority of NordicTrack components and products will be manufactured and assembled in China. The company does not openly advertise the exact locations of their production operations.

Although the ICON Health & Fitness headquarters are in Logan, Utah, they also name Canada, China, and Europe as locations in which they have an operational presence.

Indeed, NordicTrack products are advertised as having research and development, sales facilities, and manufacturing sites located across the globe.

Is NordicTrack made in China?

As with the majority of international sports equipment producers, NordicTrack parts and products are likely to be manufactured, for the most part, in China.

NordicTrack still retains a strong operational presence in Europe, Canada, and the USA, but these are likely to be more focused on distribution, sales, technical repairs, and customer service.

NordicTrack do not advertise their products as being manufactured within the USA, a strong indication that NordicTrack models are likely to be produced overseas.

Companies that do manufacture within the USA are often keen to promote this aspect of their business. Producing products ‘close to home’ is increasingly being seen as a desirable quality amongst many discerning consumers keen on reducing the environmental impact of their domestic goods.

Does iFIT own NordicTrack?

iFIT is a sister-brand to NordicTrack. Both fitness products are owned and promoted by their parent company, ICON Health & Fitness.

iFIT is a platform offering customers remote, interactive access to workout routines and videos that they can follow from the comfort of their own home or local gym. It operates on a subscription basis and is seen as a competitive rival to Peloton and other interactive workout platforms.

For US customers, ICON Health & Fitness are currently offering a subscription package which includes ownership of a NordicTrack exercise machine. 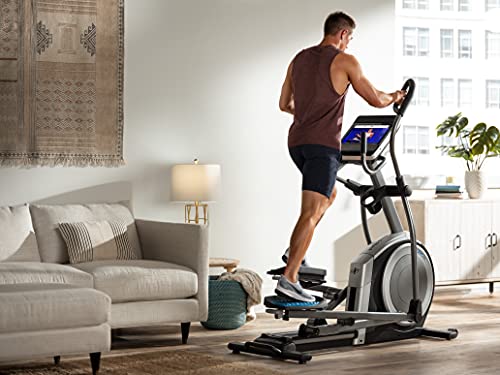 The current monthly fee is $39 under a 4 year contract. This grants customers unlimited access to the iFIT platform, as well as one of the following NordicTrack models – the Free C 1100i Treadmill, the FREE S15i Exercise Bike, the FREE Commercial 9.9 Elliptical, or the FREE RW700 Rowing Machine. Customers become the permanent owners of their chosen machine once their 4 year monthly contract is complete.